Despite assurances made to the contrary, there is nothing under the pacific sun that is new regarding Indonesia’s deadly and demoralizing tactics used to terrorize anyone who would dare exercise any small amount of press freedom.

A Brief History of Media Disintegration

They were charged with misuse of a visitor permit and taken into custody in Jayapura. The Indonesian government has also alleged they were meeting with and providing ammunition to separatists, and are considering adding the charge of “subversion” which comes with a possible 20 year prison term.

A local indigenous leader whom the journalists had interviewed, Areki Wanimbo, was arrested along with them, and initially not given access to a lawyer or any clear indication of what he was charged with. Authorities have since charged him with “treason”, and he too faces a 20 year jail sentence.

The journalists, who were filming a documentary about human rights abuses, have apologized for breaking Indonesian immigration laws, and their production company have guaranteed they will not produce any material that would discredit Indonesia. Their trial is set to begin in roughly 2 weeks.

According to Victor Mambor, chairperson of the West Papua branch of the Alliance of Independent Journalists, this harsh treatment is intended to send a message to international journalists that West Papua is still very much off limits. He also explained that permits for journalists are not easy to obtain in West Papua and involve being constantly accompanied by government agents. Mambor expects the journalists to be found guilty but serve less than the five year sentence sought for immigration violations.

Bourrat and Dandois were arrested in Wamena, West Papua, a remote region which has often been the scene of atrocities committed against indigenous Papuans by Indonesian security forces. 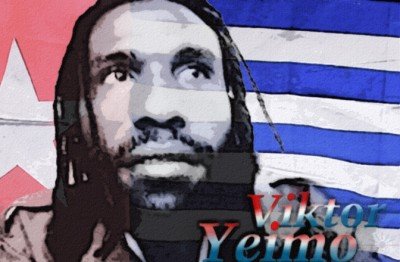 Authorities have also alleged that the French journalists were receiving advice and assistance from “NC” in Australia, identified as Nick Chesterfield of West Papua Media, and threatened him with arrest. Chesterfield stated that “assisting journalists is a basic element of freedom of the press” and is not a crime under international law. The Southeast Asian Press Alliance have called the arrest and detention of these journalists illegal, and West Papuan activists including KNPB Chairman, Victor Yeimo, have called for their immediate release.

While Indonesia’s treatment of international journalists in West Papua is scandalous, it’s also important to remember that this is just one minor incident among thousands of far worse abuses carried out against indigenous Papuans under the Indonesian occupation. In the midst of this case, KNPB leader Martinus Yohame disappeared mysteriously one day after criticizing Indonesian president Susilo Bambang Yudhoyono in a press conference. He was found dead, tied up in sack off the shore of Nana Island on August 26th. He had been beaten and shot in the chest. The KNPB has accused the Indonesian military of being behind the killing. In recent weeks, prominent West Papuan human rights lawyer, Gustaf Kawer, has also faced intimidation from Indonesian authorities and has been threatened with arrest.

These are not the actions of a democratic nation.

The international community must immediately put pressure on new Indonesian president Joko Widodo to finally begin an honest discussion with West Papuan indigenous leaders about self-determination and the protection of basic human rights.

To learn more about how to help Mr. Dandois, Ms. Bourrat, and Mr. Wanimbo, as well as all journalists and defenders of human rights in West Papua, see this appeal from TAPOL.